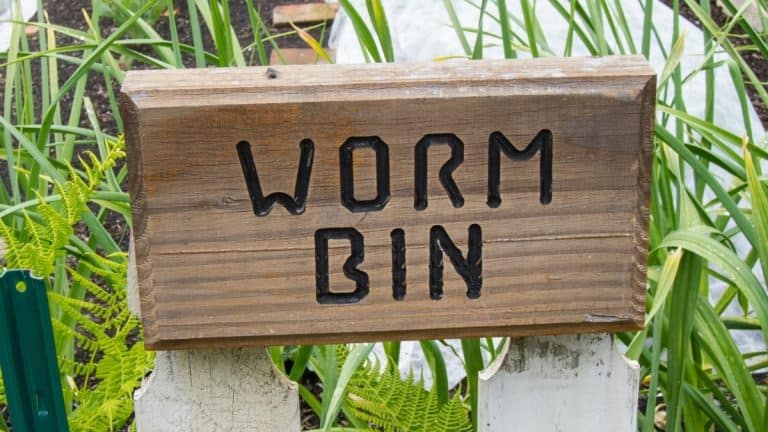 Are you looking for an easy, low-maintenance, inexpensive way to compost your garden? What could be better than setting up your own composting system with a worm farm in your backyard?

What is a Worm Composting System?

Often called vermicomposting, gardeners can build their own worm farms to enrich the soil and add beneficial worm castings to the soil. Worm farming is a perfect way to turn your kitchen scraps into usable compost for the garden.

You support the worms, and the worms support your garden by improving the quality of the soil. Worms are naturals when it comes to composting. When they eat food, it turns into compost inside their digestive tracts. That means the “waste” they leave behind doesn’t have to go to waste.

What are the Benefits of Making Compost with Worms?

The main reason most homeowners start their own worm composting system is to improve the quality of their soil and grow healthier plants.

And guess what? There are some great studies that prove that adding worm castings to your garden helps flowers bloom earlier and seedlings emerge faster than those using a commercial mix.

In a study by NC State University,

Plant growth was reported to be better with vermicompost than when recommended commercial growing media was used, and seeds germinated faster for most plant species grown in vermicompost.

The study went on to say how the worm castings added to a little peat moss can produce even better results. What an easy way to grow healthier plants without spending a fortune of soil amendments & bagged compost.

Why Else is Worm Farming Awesome?

In their article titled, “Wiggle Your Way into Worm Composting” the Oregon State University said if regular compost is known as “black gold” then compost created with worm castings should be called diamonds.

It’s a quick and easy process to get started with worm composting. You need to set up a habitat for the worms. You can do this in just about an hour or two with a DIY worm composting bin.

Here are the steps to build your own worm composter.

Which worms can you use for composting? The two best choices are Red Wigglers & European Nightcrawlers.

Red Wigglers are one of the more common worms used in composting. They do a great job of gobbling up the vegetable goodies you leave for them breaking it down into organic compost for your garden.

The red wigglers are known to be surface feeders which is why they make a good composting choice. They are also less adventurous, so they aren’t as likely to escape from your worm bin.

European Nightcrawlers are larger than the red wigglers and as the name suggests, they are slightly more active – they like to crawl instead of just wiggling. This is one of the reasons they are a favorite when setting up a  fishing worm farm. They are larger & more active, so they make better bait.

The European nightcrawlers do very well in compost bins and are actually better than the red wigglers for breaking up larger food scraps. However, they have been known to escape a time or two (they like to “crawl”)  – so be sure to keep them well fed.

If you have a fisherman in the family, the nightcrawler is a good choice. You can even buy compost worms online, Uncle Jim’s Worm Farm has a great reputation for compost worms.

You can also try African Nightcrawlers, but these will only work in a very warm climate. Alabama Jumpers are also composters, but they usually don’t like food scraps, so they are generally a sub-par choice.

Do not use Canadian Nightcrawlers. These worms are hard to raise and dig too deep to be useful in your composting bins.

Taking Care of Your Worm Farm & Problems to Avoid

Remember, when you are setting up your worm farm, you are taking care of living organisms, and if you make a mistake, you can end up with dead or unhealthy worms. Common problems include:

As one last note, when it comes time to harvest your compost (this usually takes about three months), you will need to separate your worms from the compost so they do not re-ingest the waste.

There are several common types of worm bins. The DIY type above is usually known as the “traditional worm bin.” You can use pretty much anything for the bin itself, but a plastic bin is the most common choice. There are also a few other options:

These worm bins are complex. The worms live on top, and their castings (composted waste) fall through to the bottom, where they are harvested.

This is a system that is designed in order to conserve space. A series of bins or trays are stacked vertically, with holes that allow the worms to migrate upward as they consume the food. You can make these yourself or purchase them.

These are very much like shallow worm bins, but the focus is on breeding worms rather than producing castings. Castings are produced along the way of course, but most people use these when they are producing and selling worms.

It’s easy to get started with worm farming. You’ll get a ton of great benefits plus it’s a great choice for your garden! The best worm composting bin is the one that produces plenty of worms and is easy to maintain.

You can build your own bin using the instructions above or there are quite a few ready-made worm composters you can buy if you prefer a more structured setup.

We took a look at the most popular bins on the market & our vote for the best worm composter goes to the Worm Factory 360 by Nature’s Footprint. Why do we like it?

We suggest adding 1 tray a month in the beginning. Each tray will be fully composted in about 3 months. This means every month, you can empty the lowest tray, adding the castings & soil back to your garden, then return it to the top to start the process over again.

Here is what is included in the kit:

Welcome to the Impatient Farmer where we enjoy growing just about everything outdoors.

Here you will find all our favorite time-saving tricks, tools, and techniques for doing the job quickly.

Whether you are a professional or backyard gardener we hope you find our site helpful. Join us! When writing posts for our blog, our writers may find specific products we think you will find interesting or helpful.

Links to these products are included where you can learn more about or buy each product. We may receive commissions on purchases made through these links.

As an Amazon Associate, I earn from qualifying purchases. Read more on our Affiliate Disclosure page.

Join our email list and receive our monthly newsletter.